UNAIDS and StarTimes to increase HIV/AIDS awareness with mobile application 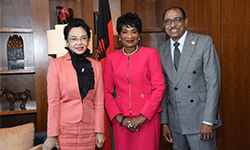 Now new HIV infections and AIDS-related deaths are more likely to occur among young people in Africa because HIV/AIDS prevention information and knowledge don’t reach out to young people efficiently. It has been an urgent issue for global HIV/AIDS Prevention Campaign to engage more young people in prevention.

He continued: “I just want to say sharing information, bringing knowledge and making sure that we can change young people will be key for ending AIDS.”

Sidibé noted that for most African countries, 70 percent of the population are below the age of 35 and they are not getting information. “Our recent approach will completely change the situation and help us to go for a generation free of AIDS.”

With smartphone use and internet penetration soaring, Africa is set for a communication way revolution. Similarly in Europe, US and China, more and more African young people, get used to watching stream videos on phones.

“Based on this trend, StarTimes launched its video streaming service in African market with StarTimes App in June. Within 3 months, StarTimes App has had 8 million downloads and the figure is expected to be 15 million at the end of this year,” said Guo Ziqi, with noting that StarTimes App right now is streaming the “Zero Discrimination” PSAs as a trial cooperation with UNAIDS through the online video platform.

Malawian First Lady and former president of the Organisation of African First Ladies Against AIDS, Gertrude Mutharika said: “Malawi has significant and rapid growth in the number of mobile phones and subscribers over the last two decades. The majority of people who buy phone are for using social media communication as well as a source of information. It is for this reason that we revise HIV prevention strategy and seeks to explore social media technology and platforms to reach out to young people.”

“I found that the launch of StarTimes App for HIV prevention is very timely and appropriate. This will greatly enhance our national efforts to reduce HIV infection, particularly on young people. I looking forward to working closely with StarTimes and UNAIDS in Malawi,” she remarked.

During the meeting, Guo introduced the China-Africa Cooperation project, “Access to Satellite TV for 10,000 African Villages”, which would be undertaken by StarTimes, and proposed to explore possible ways to help popularize HIV/AIDS prevention information and knowledge in African rural areas with the platform.

The project of “Access to Satellite TV for 10,000 African Villages” was first announced by Chinese President Xi Jinping at the Johannesburg Summit of the Forum on China-Africa Cooperation in 2015. Chinese government will aid each of 10,112 African villages with two StarTimes Projector TVs, one 32 inch Digital TV set and 20 DTH decoders and satellite dishes.

UNAIDS and StarTimes formally established partnership on 12th May, 2017 with signing a MOU in Beijing “to reduce the impact of HIV across Africa by disseminating messages to the general public to increase awareness of HIV and UNAIDS’ work and reduce stigma and discrimination of people living with HIV and populations affected by HIV”.

After the establishment of partnership, StarTimes and UNAIDS are boosting their cooperation in different African countries, aiming to mobilizing all available resources to enhance the awareness of HIV/AIDS in the continent.

In the past two years, StarTimes has broadcasted several UNAIDS PSAs to more than 10 million households with its FTA channel, Guide Channel.

Guo said: “With more broadcasting platforms and a bigger and diversified subscriber base and richer content, we will be able to make the best of all our resources to help end the AIDS epidemic by 2030.”